The pilot was pronounced dead at the scene

A PILOT has died after his plane crashed and “exploded into a fireball” as it attempted to land at a Welsh airport this evening.
Horrified witnesses told how they heard a massive blast and saw a bright light before plumes of think, black smoke began filling the air – just moments after the plane came in to land at Caernarfon Airport. 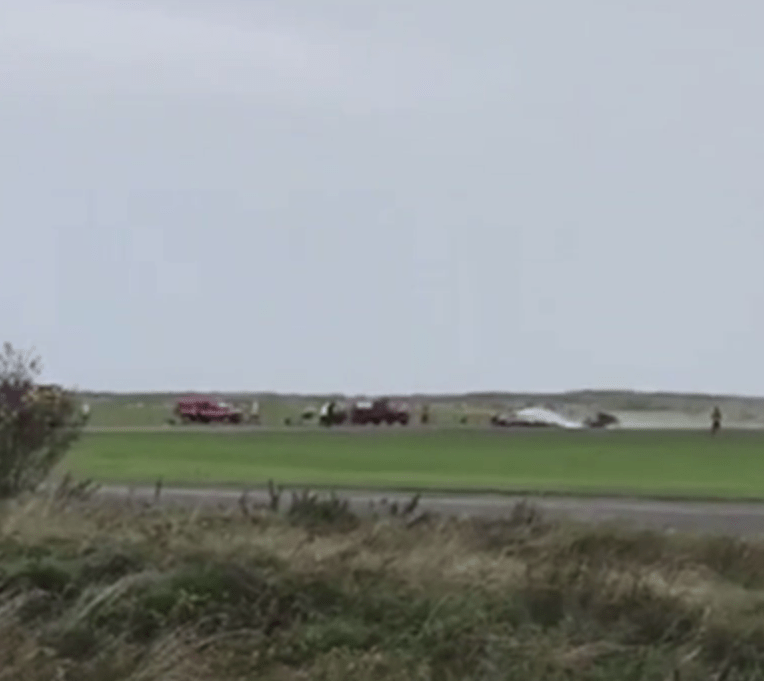 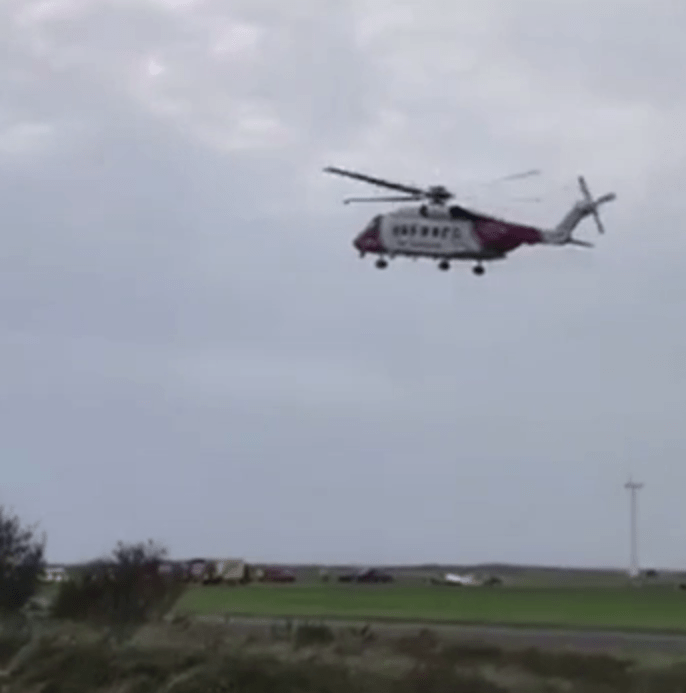 Welshpool air ambulance has arrived at the scene 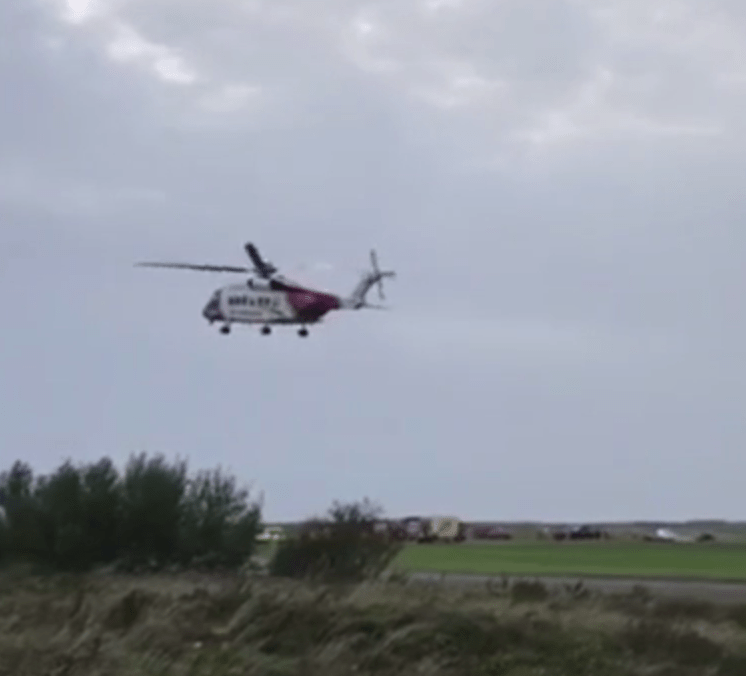 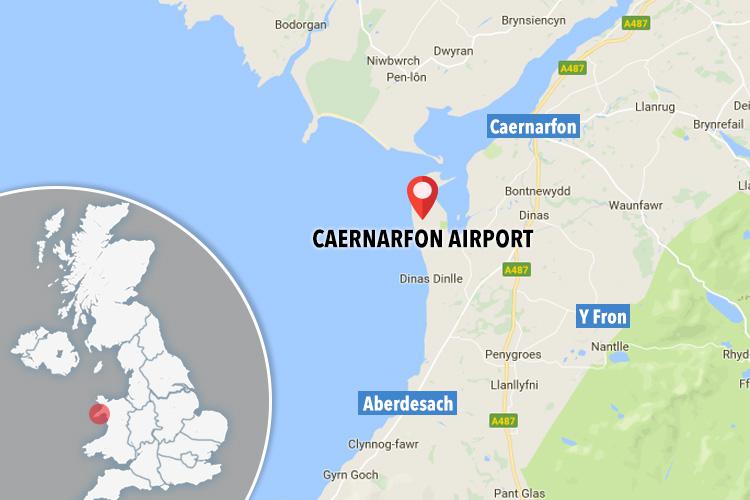 Police have launched an inquiry into the Caernarfon Airport crash which took place earlier this eveningEmergency crews raced to the scene shortly after the horrifying crash occurred at around 6.20pm.
An onlooker said there were “unprecedented” levels of police surrounding the local area.
A witness told the Daily Post she heard a “very loud boom” and saw a “massive fireball” after the aircraft started to fly very low.
Dog walker Mark Hancock recalled seeing the crash landing.
He said: “The first thing I noticed was that the plane had no landing gear on. And then I realised it was going too fast. It came in and hit the tarmac and loads of debris came off it.
“It was a sort of belly flop and it bounced up. It had caught fire straight away. When it hit the ground again it exploded.” 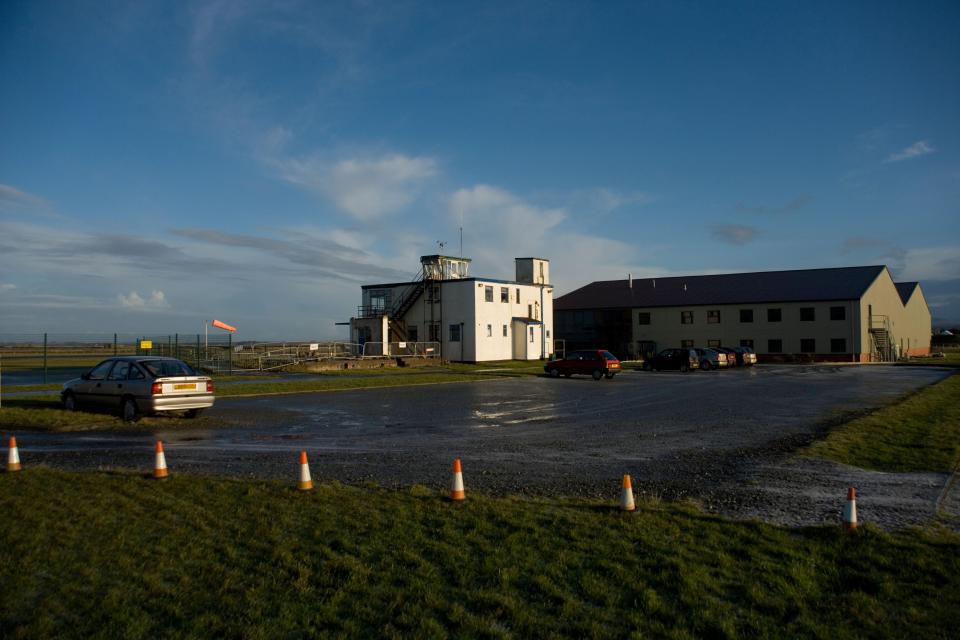 Caernarfon Airport is primarily used for training flights by Wales Air Ambulance and HM Coastguard helicopters”At 18:29 North Wales Police received a report that a light aircraft had collided on the runway and was on fire. The emergency services were called to the scene however sadly the pilot was pronounced dead at the scene.” 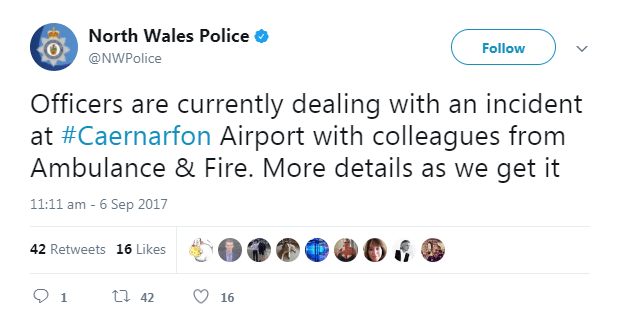 North Wales police are at the runway, dealing with the incident.
A cordon has now been set up around the airport, as emergency services continue to deal with the smoking aircraft.
Caernarfon airport – home to the HM Coastguard helicopters, operated by Bristow – operates training flights.
Welshpool air ambulance have been called to the scene, along with another smaller aircraft.

Chief Inspector Sharon McCairn, North Wales Police said: “A cordon is in place around the site and we are urging the public to remain clear of the area to allow the emergency services to deal with the incident.
“Enquiries into the full circumstances are ongoing and we are in contact with the Air Accident Investigation Branch.
“No further details are currently available.”

Firefighter Mark Fuette helps a child out of the Aircraft Response Firefighting vehicle after taking a ride at a barbecue and celebration for the airport fire station’s remodel on Saturday. (Kevin Gullufsen | Juneau Empire)

Capital City Fire/Rescue celebrated the addition of a new truck and the completion of a remodeled bay at their Juneau International Airport station on Saturday.

The occasion marked the completion of a $2.6-million expansion project funded by the Federal Aviation Administration, the City and Borough of Juneau sales and the state of Alaska.
CCFR staff lead tours of the updated facility, which was expanded 19 feet and remodeled to accommodate the addition of a third Aircraft Rescue and Firefighting (ARFF) vehicle to their fleet of fire trucks. CCFR keeps two specially-trained firemen on staff at the airport station at all times.
Aircraft fires pose specific problems for firemen, Assistant Fire Chief Ed Quinto said.

Broward County released an outside review of the shooting at the Fort Lauderdale-Hollywood International Airport.
officials weren’t prepared to handle a mass crisis, clashed with law enforcement, and some workers simply didn’t know what to do in the aftermath of the Jan. 6 shooting that left five dead at Fort Lauderdale airport, according to a review by an outside consultant released Tuesday.
The 82-page report found that the Broward Sheriff’s Office overstepped its authority by taking control of duties that should have been left to airport officials. Also faulted: the airport’s “inadequate” plans to care for and efficiently evacuate passengers in an emergency.
The review is the latest to reaffirm a Sun Sentinel investigation published in April. The Sheriff’s Office in June released a draft evaluation of its own response, also echoing the Sun Sentinel’s findings.

Among the major findings released Tuesday:

The Islamic State group is getting smarter about circumventing Western security, and events like last month’s failed terror plot in Australia are likely to occur more frequently.

That’s the assessment of a former counterterrorism expert for Turkey’s national police following news reports last week that the Australian plot involved explosives and components that were shipped from Turkey.

Writing in the Wall Street Journal, Ahmet S. Yayla, an adjunct professor at George Mason University in Virginia, says the bomb materials used in the aborted attack likely arrived in Australia via air cargo – probably aboard a passenger jet — evading all security measures.

Although the Australian operation ultimately failed, it was the type of plot that Western nations can expect to see more often, says Yayla, who from 2010 to 2013 led the counterterrorism and operations department of the Turkish National Police in Sanliurfa.

“Make no mistake,” Yayla writes. “Islamic State jihadists will continue trying to carry out spectacular terrorist attacks in the West.”

The reason: As ISIS fighters are driven out of places like Mosul, Iraq, and Raqqa, Syria, the terrorist group will be more likely to mobilize its sympathizers around the world, he says.

As a precaution, governments across the West need to review the shipping and handling procedures for air cargo in their countries and enhance security measures to avoid plots similar to the one that occurred in Australia, Yayla urges.

He also suggests that NATO-member countries encourage Turkish authorities to crack down on jihadist cells operating in the country.

As Reuters has reported, two men – brothers Khaled Khayat and Mahmoud Khayat — have been charged with conspiring to commit last month’s failed attack in Australia.

The reasons why the bombing plan was aborted aren’t entirely clear, but at a news conference Friday, Australian authorities said Khaled Khayat intended to have his brother unwittingly carry an explosive device aboard an airliner, but ultimately decided to end the mission.

The plan was “one of the most sophisticated plots that has ever been attempted on Australian soil,” Australian Federal Police Deputy Commissioner Michael Phelan said during the news conference, as Fox News reported.

The suspects based in Australia received the explosive materials from Turkey and went to the airport with the bomb in their luggage, authorities said, but abandoned the plot just before reaching airport security screening.

The suspects instead began working on a separate device that could release highly deadly hydrogen sulfide toxic gas, Yayla writes.

The Australian authorities found out about the terror plot almost two weeks later, following a tip from a foreign intelligence service, Yayla notes.

A senior diplomat in a position to know directly about the incident confirmed to Fox News the specifics of the plot and the authorities’ actions.

Meanwhile, Yayla writes, ISIS supporters in Turkey last month published a 60-page “Lone Wolf’s Handbook,” a manual for teaching terrorists how to make a bomb or drive a truck into a crowd of pedestrians.

But it is not only so-called “lone wolves” who are a threat, Yayla writes. The Australian bomb plot was coordinated with an ISIS commander, possibly in Raqqa, who “coordinated” and guided the Khayat brothers for more than three months.

The commander had the bomb assembled with military-grade and high-end explosives, Yayla writes.

A Newtown man was arrested after he tried to bring a revolver through a TSA security checkpoint.

Charles Camiel looks into the camera for a facial recognition test before boarding his JetBlue flight to Aruba at Logan International Airport in Boston.

Passengers at Boston’s Logan International Airport were surfing their phones and drinking coffee, waiting to board a flight to Aruba recently when a JetBlue agent came on the loudspeaker, announcing: “Today, we do have a unique way of boarding.”

On flights to the Caribbean island, JetBlue is experimenting with facial recognition software that acts as a boarding pass. The airline says it’s about convenience. For the federal government, it’s also about national security. But for privacy activists, it’s an intrusive form of surveillance.

This is the first trial between an airline and Customs and Border Protection to use facial recognition in place of boarding passes.

Michelle Moynihan, who was flying to Aruba for a wedding, says facial recognition would make her life easier.

“Typically when I travel I have my three kids with me and I travel alone with them,” she says. “They’re all under age 10, so flipping through multiple boarding passes on my phone, making sure I have all the kids, all the backpacks, all the suitcases can be cumbersome and frustrating.”

Moynihan gets in line and right before she gets to the jet bridge, there’s a camera that’s about the size of a shoebox. It takes her photo and she gets a checkmark, saying she’s good to go.

The whole process takes about 5 to 6 seconds.

“We’re basically capturing that picture at the boarding gate and then providing it to U.S. Customs and Border protection,” says Sean Farrell, who works for SITA, the company running this technology. SITA provides a lot of the IT infrastructure you see at airports.

The government uses existing databases to compare a traveler’s face against all the other passengers on the flight manifest.

JetBlue is pitching this idea of facial recognition as convenience for customers. It’s voluntary. But it’s also part of a broader push by Customs and Border Protection to create a biometric exit system to track non-U.S. citizens leaving the country.

After the Sept. 11 attacks, there was a lot of talk about the necessity of a biometric exit system, but the tech and computing power just wasn’t good enough. Now, facial recognition experts say it’s more accurate.

And Farrell sees a future — not too far off — where our faces could be our IDs.

“The end game is that in a few years’ time you’ll be able to go through the airport basically just using your face,” he says. “If you have bags to drop off, you’ll be able to use the self-service system and just have your face captured and matched. You’ll then go to security, the same thing. … And then you go to the boarding gate, and again just use your biometric.”

But that worries people like Adam Schwartz, a lawyer with the Electronic Frontier Foundation, a nonprofit digital rights group. He says facial recognition is a uniquely invasive form of surveillance.

“We can change our bank account numbers, we even can change our names, but we cannot change our faces,” Schwartz says. “And once the information is out there, it could be misused.”

Kade Crockford, director of the Technology for Liberty Program at the ACLU of Massachusetts, says she’s particularly concerned by the JetBlue program because of the government’s role.

“The biometric databases that the government is amassing are simply another tool, and a very powerful tool of government control,” she says.

Customs and Border Protection insists it will discard facial recognition photos taken of U.S. citizens at the airport, and only keep a database of non-U.S. citizens.

Back at Logan Airport, passenger Yeimy Quezada feels totally comfortable sharing her face instead of a barcode.

“Even your cellphone recognizes selfies and recognize faces, so I’m used to that technology already,” she says. “And, I’m not concerned about privacy because I’m a firm believer that if you’re not hiding anything, you shouldn’t be afraid of anything.”

Customs is running similar biometric tests at airports in Atlanta, New York and the Washington, D.C., area. The goal is to deploy facial recognition tech widely by early next year.