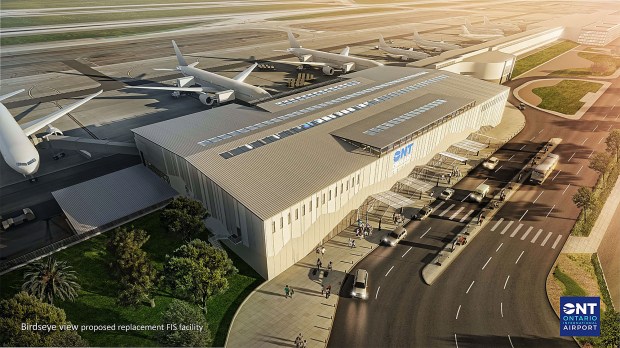 Foreign travelers to Ontario International Airport disembark much like local travelers did before the modern terminals were opened two decades ago.
International passengers must exit the plane down a staircase, carry-on suitcase in tow. They make their way off the tarmac to a modular building.
This was considered behind-the-times for domestic passengers, which is why new terminals were opened in 1998. In 2018, the experience is so outdated it simply doesn’t meet requirements of modern-day passengers, said Ontario International Airport Authority CEO Mark Thorpe.
“Customers today expect jet bridges. It’s an inferior service to go down to the FIS facility,” said Thorpe, referring to the federal inspection services facility.

In January, the authority’s commissioners agreed to solicit design and construction proposals that will ultimately replace the 44,000-square-foot federal inspection facility and international terminal. The effort is part of the authority’s overall goal, since regaining local control November 2016, to improve the customer experience at Ontario Airport.
Construction is anticipated to begin this year and wrap up in the first quarter of 2020, according to a report to commissioners. Based on preliminary costs, the replacement project could cost between $70 million to $80 million.
“We won’t know until the design bids come in,” he said.
The authority is still exploring a range of funding options for the project, “and our goal is to find revenue streams that are the least amount of burden on the airlines,” said Atif Elkadi, senior director of marketing, communications and external affairs for Ontario airport.
The current facility is a detached building west of the twin terminals. Officials envision building the future facility to the east, connecting it to Terminal 2.
Renderings depict a sleek facility within the center of a multi-level building. The three-story building would include an airline lounge on the top floor, a departures concourse on the second and the FIS and arrival hall on the lower level.
“Without building an entirely new terminal, we’ll be able to provide that world-class experience that international passengers expect,” Thorpe explained.
As of now, departures via an international carrier such as Volaris or soon-to-be carrier China Airlines leave from Terminal 2, but all international arrivals must pass through the FIS facility. Then airport staff have to tow the aircraft back to the terminal, an unneeded expense and waste of time, Thorpe said.
The new building would allow for international carriers to arrive and depart from the same gates. Thorpe said the authority considered four different iterations of the proposal and felt this was the best for ONT.
“All other options would have required a cannibalization of too much of our revenue-generating facilities in the terminals,” Thorpe said. “This was a way to accommodate this traffic without cutting into revenue-generating space.”
According to the report, international travelers would enter security through Terminal 2. Once they’ve cleared security, international passengers would head to the eastern end of the terminal where they would enter the federal inspection services facility. The new building would have food and retail options, something the current one doesn’t offer.
It would accommodate three to four wide-body gates, less than the nine the current facility can hold, but still suitable for the airport’s projected growth.
“One of the key points for us is that we’ll have wide-body jet-bridge capacity, which is important for flights from Asia and flights from Europe,” Thorpe said.
The current building dates to 1994, prior to the security standards set after the 9/11 terrorist attacks. Replacing the facility would help the authority meet new security standards implemented by U.S. Customs and Border Protection in 2017. Under those standards, passengers must pick up their checked baggage before getting in line for immigration inspection.
In August, the authority ordered two boarding ramps that could accommodate wide-body aircraft. Ramps are a safer option than purchasing staircases, Thorpe said.
Ontario’s governing body in a special meeting Feb. 2, approved a resolution that would make a little more than $1 million in technology-related improvements before China Airlines begins operations March 25.
As part of the vision for the replacement international terminal, arriving passengers would clear customs and exit the facility, heading west to catch any domestic flights in Terminal 2 or exit the terminal to the north, where there would be passenger pickup curbside, a shuttle or other ground transportation.
Commissioner Julia Gouw asked Thorpe during the Jan. 23 meeting if Ontario would outgrow this facility in a few years.
“I hope so,” Thorpe replied.
Eventually, Ontario will have the capacity for a new passenger terminal, he added.
The international terminal would be designed to handle 800 passengers per peak hour, a 14-percent increase compared to the existing facility which handles 700 passengers per peak hour.
“This is a smart way to bridge the gap from where we are today to that need for a new terminal. If we built it today, we’d be overbuilding,” Thorpe said.
“This allows us to accommodate a significant amount of growth and then establish a market that would justify an expansion.”
Because this is a replacement project, airport officials said a whole new environmental report would not be needed.
As Commissioner Curt Hagman points out, the replacement international terminal will only be a temporary facility that can be used for the next two to seven years. The time period will depend on how fast the airport grows. Ideally, he’d like to see passenger traffic grow 10 percent from the previous year.
Building a permanent, state-of-the-art-facility would require a five-year build-out process, a luxury ONT doesn’t now have due to a pressing need for an updated building.
“This FIS facility will put us on the radar,” Hagman said. “We just can’t do things fast enough, unfortunately, and there’s a lot of catching up that we have to do.”